This week Charlie and Lily learned about the letters O and P. We read Polar Bear, Polar Bear, What Do You Hear? but sadly it took a backseat to Brown Bear, Brown Bear, What Do you See? Apparently the polar bear does not hold the same appeal as the brown bear. We sang "Have You Ever Seen a Penguin?" and made pineapple pudding. This pudding is delicious and super easy to make - just mix one 20 oz can crushed pineapple with one large box of instant vanilla pudding mix. Stir in one 16 oz container of sour cream, refrigerate and enjoy. (Thanks Aunt Patty, for giving me that recipe this summer - I've made it many times since then!) Charlie had no interest in making the pudding with me (he snagged the empty pudding box and wandered off) but Lily was super intent on stirring the pudding and loved tasting it. 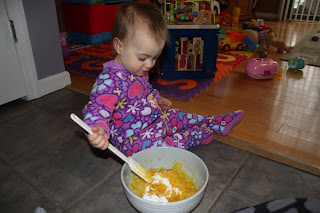 We did two art projects this week, since I didn't want to gyp either of our letters. In honor of the letter O we glued Cheerios to paper Os. Charlie only managed to grab and eat one glue-covered Cheerio, so I consider the project a success. 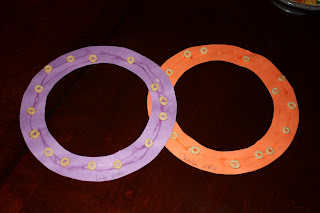 We also made potato prints. I cut potatoes into shapes, and Charlie and Lily used them as stamps, dipping them in paint and pressing them on the paper (with some help, of course). 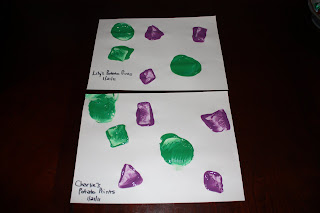 I kept asking Charlie to say "cheese" and this is all he'd give me - over and over and over. Goof! But look at all the teeth he has now! 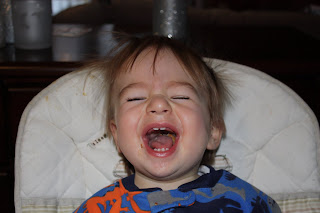 This week we finally set up the tent/ball pit/tunnel that my best friend Colleen and her family gave Charlie and Lily for their birthday. 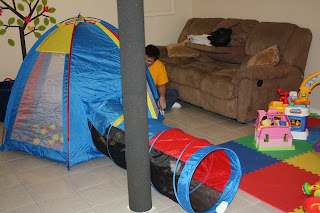 At first Charlie and Lily were afraid to go through the tunnel, so I decided to show then how it was done. This tunnel is NOT made for adults. 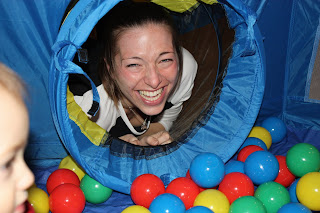 But it's perfect for toddlers! 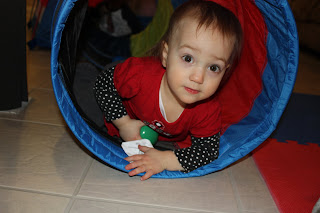 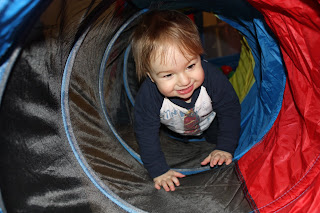 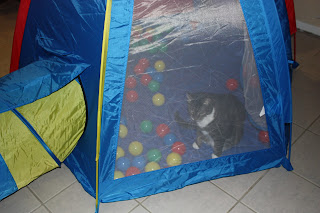 Charlie being a goof! I wish I could tell you boys outgrow that, but it only gets worse! The Pineapple pudding sounds great. I'll have to try it!

I found your blog over a year and a half ago while you were pregnant with your three little beauties and in the hospital - the girls over on the IC board posted your blog address.

We were pregnant at the same time. I've been following your blog ever since, and your little angels are just precious! I can't believe how big they are - and look so stinkin' cute!

I've been given a blogger award and I am passing it on to you! You can check it out on my blog!