Since I had to go back to work today for the first time since Charlie came home, Brooke started her temporary career as a stay-at-home mom. Luckily, she had plenty of help to ease her in to the job.

First, Nana (Brooke's grandmother) came over to give an extra set of hands to help out around the house. Then the visiting nurses came to check up on the babies. They weighed them (Charlie is at 7 lbs! and Lily is at 6 lbs 2 oz) and took temperatures and answered a few lingering questions about minor concerns. It's really nice to have them come, if for no other reason than simple peace of mind. We got so used to doctors and nurses being around the babies 24/7 so it's nice to have medical professions come give us some reassurance every now and again.

By the time I got home from work, Brooke had managed all the feedings by herself and had given both babies sponge baths. She had given both Tummy Time and held each baby for as long as possible. In short, she was exhausted. Lucky for me, too, because after being away from them for so long (for the first time) I was anxious to get my hands on my babies. So Brooke took a nap and I spent my evening cuddling with my little loves.

Sleeping has been a little bit of an issue. We're still trying to figures out what is best in terms of late-night feedings. We started to stagger their feedings a bit so they're not eating at the exact same time any more, which should make it possible for one of us to get a few consecutive hours sleep each night. So far we're doing well, but I guess the test will really come after we've been doing this for a few months. Not that I'm complaining-- this is an issue I've wanted to have for a long, long time!

And now for some pictures (and videos)!


Lily's first Tummy Time! We're supposed to put them on their stomachs for a few minutes each day to help them build up strength in their necks and backs.


Oh, how we just love to see them together, even if they're slapping at each other! 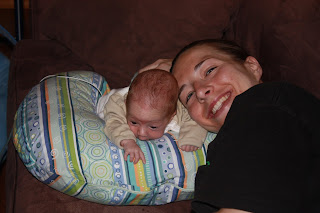 Charlie was not a big fan of his first Tummy Time. 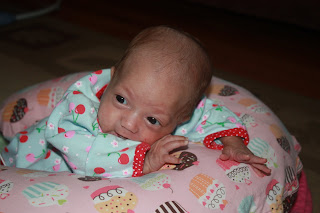 Lily, however, was happy as could be on her belly. 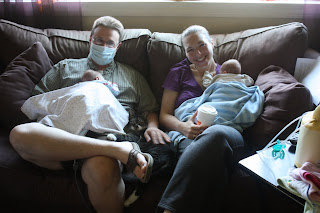 Poor Uncle John had to wear a mask during his first visit at home with the babies. He had just got off a plane and didn't want to expose the babies. Roy was quite happy to put himself between all the action. 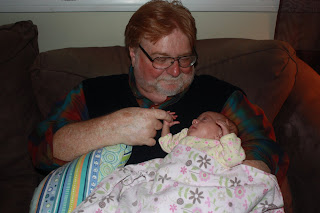 They are so cute! I love the little videos, even if Lily didn't have as much fun :)

I've been missing your posts. I know you said you weren't going to post daily, but I got used to the posts and can't get enough of the babies!

Ok, I must admit, it's a bit of an adjustment for me not to have a daily update. It was part of my late evening/early morning routine for months now. But thank you for spoiling us with these adorable videos!! So cute! I'm so glad that everyone is doing so great! They just keep getting cuter & cuter!!

Those were such awesome videos! And I so love the little baby noises!

So glad that everyone is home together. What a joy, and how exhausting two newborns can be. Quick suggestion about feedings - feel free to ignore it if you want to. :) With our multiples, we feed two at a time using boppys and receiving blankets wadded up to prop the bottles. I know that "propping" can be a no, no but in our case, the person doing the feeding was always right there keeping an eye on both babies so their was no risk of choking. It allows one person to feed both babies at once and was a life saver for us and the need for more sleep. The boppys put the babies in the perfect position and you can then just pick each one up and burp as needed. I can share pictures of the method in action if you are interested (jlmurdock1977@yahoo.com).

YAY an update!!! I know today had to be exhausting for you Brooke but it seems you did wonderfully and that the babies are as happy as can be! Daddy also seems to be wonderful in understanding how tiring Mommy was after a long day and that was so nice of you to give Momma a nap!
I love the pics but the videos were awesome! The cute little squeeks Lily was making are oh so cute!!!!!! Congrats again!!!

OH! By the way, the video of Lily squeaking, it looks as if she's waving to the camera! She's gorgeous!

Oh, thanks for the new update. I was really suffering withdrawl from the daily baby update. All of those pictures should hold me a couple of days till the next one.
Lily and Charlie are so adorable.

I've been out of town twice and otherwise so busy that I haven't been able to read blogs. I just caught up on posts from you guys since Sept. 26 and YAYYYYYYY! for Charlie and Lily to be home! So fun and exciting and just Yayyyy!
Love all the pictures and videos.
God bless and He certainly already has!

What a great post to make up for keeping me hanging here. Of course which one made me break down... Ferdie and Lily...
Happy Birthday Ferd - I figured that's where you were when I sang to you... I absolutely love the squeaks... and the two of them together... And the one with Uncle John... I love them all again...

Angels you get more and more precious each day. I Love You Sweetpeas...

All My Love, Auntie :) xoxoxo

wow, thanks for the updates, and the videos, they are getting so big..and are very cute.

They are so adorable! I forgot about the squeaking noises. Isn't it funny how even if they are smacking each other in the face, they don't seem to mind? Great job making it through your first day, Brooke!

So glad you guys are working together so not just one is getting worn down!!! Having children is definitely a team effort and you are doing a great job!!! Loved all the pictures and videos. They are getting so big.

I heard about your blog from a friend a couple of months ago - and now I can't stop reading it. I am so happy for you guys that your babies are home. My little one was a month early and didn't like tummy time either, so I rolled up a blanket and put it under his arms instead of the boppy. He seemed to like it much better because the incline wasn't so much. Good luck! I will continue to keep your family in my thoughts and prayers.

So adorable. I just love the tummy time video!!!!

Don't worry - one day those babies will sleep. But you will never sleep like you did before the babies. It just doesn't happen. But there is a light at the end of the sleepless tunnel.

Glad to hear it's all going so well! Eventually you'll get the sleep thing figured out; but I don't think you ever sleep quite as well as you did before babies! Enjoy the time while their little...they really do grow up FAST.

Thank you for the videos !!! I love thier little squeaks. I love how you two are such a loving team !! I love everything about your blog --- You are a blessed couple and I get little goosebumps whenever I read your news. God Bless your beautiful family !
Eve S.

I love the videos! My favorite is the one of the both of them together. You are so blessed!

I've been following your blog for about a month now, found it linked from a friend of mine who had preemie twins last year. Your family continues to amaze me. I look forward to reading your new posts on a daily basis.

Just love the updates and especially love the videos and pics. The little angels are SO precious and SO cute!!! Yep, Grandpa Ferdie has left his mark with the red hair that Charlie seems to be inheriting. May God continue to bless you and keep you all healthy and safe. Love you.