And in This Corner... 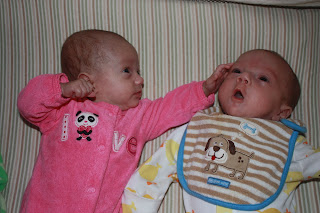 So I had an entirely different title planned for this post, and then I snapped this picture of Lily and Charlie and had to change it! Just look at that right hook! I find it ironic that her outfit says "love" on it. I have no idea what Charlie did to upset the Bug, but I'm pretty sure he will never do it again.

The babies have been doing well since our last post. On Friday we had a visit from the Early Intervention team. The babies were evaluated in several different areas of development such as cognitive, speech, fine motor, gross motor, etc. Mainly I just answered a bunch of questions regarding what Charlie and Lily do and do not do. For example, do they hold their heads up for 5 seconds when on their tummies? (The answer to that is yes, if anyone was curious!) Then the occupational therapist did a few quick tests on them, like shining a light in their face to see if they would respond to it and shaking a rattle near them to see if they would turn towards the sound.

My answers and the babies responses were combined to give them a score of their development. Both babies scored in the 0-3 month range, which is on target for their adjusted age. Lily actually scored above the 3 month mark in the areas of fine and gross motor. For as long as I can remember, Lily has been bringing her hands together at her chest, and apparently this is actually a major sign of development, as it means that both sides of her brain work well together. Charlie is not yet doing this, so that one thing helped Lily outscore her brother. Regardless, both babies qualify for additional monitoring and support due to their gestational age, and we're happy to know that we'll have experts letting us know if the babies are on track.

This afternoon Joe was on Daddy duty while I went to my friend Jill's baby shower. He enlisted Uncle John's help so Charlie had a whole afternoon of male bonding. Lily was of course, showered with affection, but I like to think she was happy to have Mommy home for some girl time. Jill's shower was beautiful though, and I enjoyed meeting her sweet family who all read the blog (hi, ladies!). Jill is cooking a pretty little girlfriend for Charlie who is due the end of November. We better not show her the picture of him being beat up by his sister - that may put his manhood in question!

Charlie looks so cute in his Ducky towel from Great-Aunt Diane! 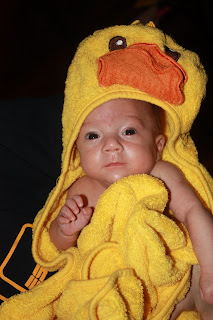 Lily is so pretty when she's not beating someone up. 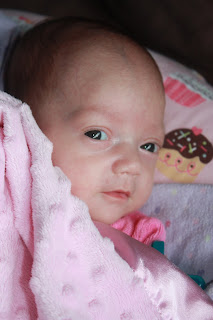 A full couch! (And yup, there's yet another pair of awesome pajama pants. And don't forget the fuzzy purple socks and Rabies Awareness Fun Run t-shirt. I am so stylish.) 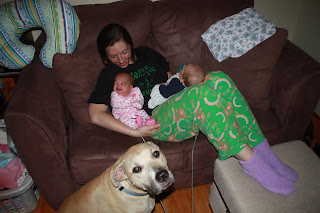 A comment on the pajama pants...after we had the triplets in 2007, I basically spent the next three months in PJ pants :D My favorite pair is a flannel pair that is black with scary monster eyes all over them. Now after just having number 4 I am specializing in plain yoga pants during the day paired with nursing shirts and...you guessed it...pajama pants at night! Just can't get enough of those PJ pants. I am jealous of the Rabies Awareness t-shirt, however...but I do have a selection of awesome 12 yr. old college t-shirts too.

Hi there, love your blog and your beautiful children. I just came across it recently but started reading it from the beginning and read the last 8 months or so in a few days span.
Anyways, I usually always a lurker, never a commenter on blogs I follow, but I've been wondering when their monitors will be able to come off? Is there some sort of milestone they're waiting for? And how have they been doing with the episodes?
Also, WHERE DID YOU GET THAT SHIRT?!?! I had to do a double take when I read what the "run" was for. HILARIOUS!!!!

Christine: I found the shirt online, I think at the NBC store. It's from and episode of The Office.

As for the monitors, each month the data collected from them is sent to the hospital and reviewed by the doctors. Then we have a meeting with them to discuss the data and then a further plan of action is determined. We will most likely move from having the monitors on all the time to having them on just at night before they are gone completely. But the babies will be on them for at least a few more months, I am sure, due to their history and prematurity. As for the episodes I delibrately don't discuss them because I hate to jinx anything! So you can sort of figure out an answer from that ;)

I LOVE the pictures from today's post!!! They are growing up so fast, and look so alert and soooo sweet!!

That sure looks like a right hook to me - you'd better watch out Chunk. Be patient with your older brother Lil - big brother's are the best... :)

I love the ducky towel and did someone pinch my Lily Bug?

Keep up the good work angels. You're getting so big and strong. OMG - you are soooooooo cute...

All My Love, Auntie :) xoxoxo

I LOVE that picture, totally a keeper forever! You need to send that one in to The Ellen Show and/or things like that. Ellen loves cool pictures like that. That is wallpaper (computer) picture material there!

Thats my Lily. Scoring above average for her age. We had developmental class time when we were not having shopping class time in the NICU. (I did not teach her to beat up her brother though) They are getting so big. I miss my bug.

Ah, yes....pajama pants. The wardrobe of every new mother. My kiddo was born in June also, so I have my jammy-skirts. I think my husband is ready to burn them. Oh well!!

Charlie and Lily are getting so BIG!! LOVE the duck!

that first picture is just adorable! Looks like Lily will be able to defend herself if anybody ever bothers her. I literally awwww'ed out loud when I saw it.

Those are some adorable pictures!!!! I'm so glad to hear that the babies are continuing to do well.

LOVE the pics from this post!! precious! and you look fabulous in your PJ pants, don't worry!!!

Bwahahahahahaha! LOVE the picture of Lily punching poor Charlie! The expression on Charlie's face is priceless. So cute!

yay for an update- I have seriously missed the updates!

The babies look so healthy and beautiful. Brooke, is your shirt inspired by The Office?! That was what came to mind haha!

the mind behind said...

Forget being stylish, I'm lucky to be dressed at all!!
Thanks for the updates. I started reading when I was on bed rest with my little lady who is now 5 months old. I've been praying for you all and its SO good to see the babe's growing!

You look fabulous in those pj pants :) Charlie & Lily ae getting so big & cuter by the post! I'm glad to hear they are doing so well! Makes me so happy!

Brooke, you and the babies look great. You two are getting so big and more beautiful as each day passes. Keep up the good work, Little D's!!!!

The ducky town photo is so cute!!!